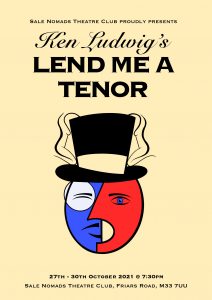 It’s 1934, and the world’s greatest tenor Tito Merelli has come to Cleveland, Ohio, to perform for one night only at the Grand Opera Company, to celebrate their tenth anniversary season.. When he is unexpectedly incapacitated, Max, the opera director’s meek assistant, is given the daunting task of finding a last minute replacement. Chaos ensues – including a scheming soprano, a tenor-struck ingénue, a jealous wife, shrimp gone bad and the Cleveland Police department.

This uproarious comedy is a riotous, unpredictable explosion of mistaken identities and unexpected romance.

A sensation on Broadway and in London’s West End, this madcap, screwball comedy is guaranteed to leave audiences teary-eyed with laughter.